The Westin Ottawaa * | Ottawa, CANADA
From 85 to 550 CAD
Event Preview 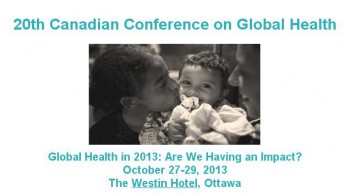 Ambassador Goosby also leads the new Office of Global Health Diplomacy at the U.S. Department of State. The office guides diplomatic efforts to advance the United States’ global health mission to improve and save lives and foster sustainability through a shared global responsibility. The Office of Global Health Diplomacy also focuses on providing diplomatic support in implementing the Global Health Initiative’s principles and goals. Ambassador Goosby served as CEO and Chief Medical Officer of Pangaea Global AIDS Foundation from 2001 to June 2009. He also previously served as Professor of Clinical Medicine at the University of California, San Francisco. Ambassador Goosby has played a key role in the development and implementation of HIV/AIDS national treatment scale-up plans in South Africa, Rwanda, China, and Ukraine. He focuses his expertise on the scale-up of sustainable HIV/AIDS treatment capacity, including the delivery of HIV antiretroviral drugs, within existing healthcare systems. Ambassador Goosby has extensive international experience in the development of treatment guidelines for use of antiretroviral therapies, clinical mentoring and training of health professionals, and the design and implementation of local models of care for HIV/AIDS. He has worked closely with international partners on the development of successful HIV/AIDS treatment and treatment-based prevention strategies for high-risk populations.

King Holmes is the recipient of the Canada Gairdner Global Health Award for 2013. King Holmes became the first William H. Foege Chair of Global Health at the University of Washington effective Nov. 1, 2006. Dr. Holmes also heads the Infectious Diseases Section at Harborview Medical Center and founded and directs the UW Center for AIDS and STD, a WHO Collaborating Center for AIDS & STD.

Dr. Holmes is also principal investigator for the International Training & Education Center on Health (I-TECH), a collaboration between UW and University of California San Francisco – one of the largest HIV/AIDS training programs in the world.

Dr. Holmes chairs the STI Working Group for the NIH HIV Prevention Trials Network. He has participated in research on STIs for over 40 years in Africa, Latin America, Southeast Asia, and the Western Pacific. He has authored over 500 peer-reviewed publications and edited 30 books, monographs, and journal supplements. He has trained and/or mentored over 100 scientists involved in HIV/STI research and care.

Ronald Labonte is Canada Research Chair in Globalization & Health Equity, Institute of Population Health , and Professor, Department of Epidemiology and Community Medicine, at the University of Ottawa , and Adjunct Professor, Department of Community Health and Epidemiology, University of Saskatchewan . He is the former Director of the Saskatchewan Population Health and Evaluation Research Unit (SPHERU), a bi-university interdisciplinary research organization he created and led from 1999 until 2004, that was committed to “engaged research” on population health determinants at local, national and global levels. Ron is a founding member of the Canadian Coalition for Global Health Research, and a past board member of provincial and national public health associations in CanadaHe recently worked with international colleagues in preparing The Global Health Watch, an ‘alternative world health report,’ released in July, 2005.

Recent books include Health for Some: Death, Disease and Disparity in a Globalizing Era (co-authored with Ted Schrecker and Amit Sen Gupta, Centre for Social Justice, 2005); and Fatal Indifference: The G8, Africa and Global Health (co-authored with Ted Schrecker, David Sanders and Wilma Meeus, University of Cape Town Press/IDRC Books, 2004). Ron, and his colleague Ted Schrecker, will be coordinating the knowledge network hub on globalization for the recently announced WHO Commission on Social Determinants of Health (2005-2007). Prior to joining academia in 1999, Ron worked 10 years as international health promotion and public health consultant, and 15 years with provincial and local governments and NGOs in community health development.

Dr Kumanan Rasanathan works at UNICEF Headquarters in New York, mainly on district health system strengthening to improve the delivery of maternal and child health services in Asia and sub-Saharan Africa. He is also the focal point at UNICEF for health in the post-2015 development agenda, and a member of the task team managing the global thematic consultation on health for post-2015.

Kumanan is a public health physician from New Zealand, with degrees in medicine, public health and politics. Prior to joining UNICEF in 2012, he worked at WHO in Geneva on primary health care and social determinants of health, as a principal author of the World Health Report 2008 on primary health care, and as a member of the WHO Secretariat of the Commission on Social Determinants of Health and the World Conference on Social Determinants of Health. Prior to joining WHO in 2007, Kumanan worked in a range of roles in New Zealand, Australia, China and the United Kingdom, as a clinician, researcher and policy-maker in clinical practice, vaccine clinical trials, primary health care, national health policy and reducing inequities in maternal and child health.

Gita Sen, Professor at the Centre for Public Policy at the Indian Institute of Management
Speaking on Monday, October 28th

She has served on a number of boards and committees including the Board of UNRISD and IDS, Sussex and is currently, inter alia, a member of the Global Advisory Board of the Open Society Foundations, the UNFPA’s High Level Task Force for ICPD, the High Level Expert Group of India’s Planning Commission, the Mission Steering Group of India’s National Rural Health Mission, and the Board of the National Health Systems Resource Centre. She is the recipient of a number of awards and honours including the Volvo Environment Prize, and honorary doctorates from the University of East Anglia, the Karolinska Institute (Stockholm), the Open University (UK) and the University of Sussex, as well as a Fullbright Fellowship. She has delivered a number of endowed lectures nationally and internationally, and has published extensively on gender and development, health equity, and population policy.

Theo Vos is Professor of Global Health at the Institute for Health Metrics and Evaluation (IHME) at the University of Washington. He is a key member of the Global Burden of Disease (GBD) research team, and is working to improve the GBD methods, update sources of data, and develop partnerships with countries to produce GBD estimates that are most relevant to policy decision-making. He is also focused on linking the epidemiological estimates from GBD to information on health expenditure and cost effectiveness.

Prior to joining IHME, Dr. Vos was Director of the Centre for Burden of Disease and Cost-Effectiveness at the School of Population Health of the University of Queensland. While there, he led burden of disease studies in Australia and contributed to studies in Malaysia, South Africa, Singapore, Thailand, Vietnam, and Zimbabwe.

Dr. Vos received his PhD in epidemiology and health economics from Erasmus University and his medical degree from State University Groningen, both in the Netherlands. He also studied at the London School of Hygiene and Tropical Medicine where he obtained an MSc in Public Health in Developing Countries.

Courses / Workshops within the event