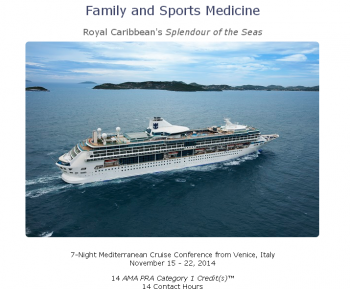 Designation: Continuing Education, Inc designates this live activity for a maximum of 14 AMA PRA Category 1 Creditstm. Each physician should claim only the credit commensurate with the extent of their participation in the activity.

Continuing Education, Inc. is accredited as a provider of continuing nursing education by the American Nurses Credentialing Center's Commission on Accreditation.

Accredited status does not imply endorsement by Continuing Education, Inc/University at Sea or ANCC of any commercial products displayed or used with an activity.

Event Overview
Welcome message:
To review the diagnosis and management common diseases and conditions encountered in the family medicine practice
Topics and Objectives TBA
Conference Sessions generally take place on days at sea (as itinerary allows), giving you plenty of time to enjoy your meals, evenings and ports of call with your companion, family and friends.
Speakers/Faculty:

Dr. David Weiland, M.D. is a graduate of Amherst College and Columbia University and serves as Vice President of Medical Affairs at Bayfront Medical Center in St. Petersburg, Florida. At Bayfront, he works closely with the medical staff where he combines physician feedback with strategy, technology and innovation to set standards in hospital-based care. He has more than a decade of experience as a medical educator, formerly serving as assistant director of Bayfront’s Family Practice Residency Program. He also served as the Medical Director for the Suncoast Hospice in Pinellas County Florida.

He completed his medical training at the University of South Florida and served as Chief Resident of internal medicine before entering private practice in 1992. He continues to present and publish nationally on a series of Palliative Care and other medical issues. He is board certified in both Internal Medicine and Hospice and Palliative Medicine. Recently, he has promoted the integration of palliative care consult services into Pinellas county community hospitals to increase the access of pain and symptom management services to those struggling with chronic life threatening illnesses.

Today he is Professor of Medicine and Professor of Orthopedic Surgery in the Department of Community and Family Medicine at the University of Missouri-Kansas City School of Medicine where he is Director of the Sports Medicine Fellowship Program and Medical Director of the Sports Medicine Center. He helped author the American Diabetes Association’s Consensus Statement on Activity and Exercise in Type 2 Diabetes and is currently a member of the American Diabetes Association’s Technical Writing Committee for Exercise and Activity in Type 1 Diabetes. In addition, he helped author the American Medical Society for Sports Medicine’s Position Statement for the Management and Treatment of Attention-Deficit/Hyperactivity Disorder (ADHD) in Competitive Athletes.

He served as a Crew Chief for the United States Olympic Committee from 1996-2004, was Director of Medical Coverage for the Men’s NACC South Regional Basketball Tournament in 1998, the Men’s NCAA Final Four Basketball Tournament in 1999 and was an original team physician with the Tampa Bay Rays professional baseball team from 1997-2005. He has served as Medical Director for the Annual Hospital Hill Run in Kansas City since 2007 and currently serves as the Head Team Physician for the University of Missouri—Kansas City NCAA Division I Intercollegiate Athletic Program.

A past Editorial Board member of Clinical Diabetes and Insulin Dr. White has authored over 100 peer-reviewed publications and is co-editor of the textbook Exercise Testing for Primary Care and Sports Medicine Physicians. He has served as an ad hoc reviewer for the Canadian Journal of Diabetes, Diabetes Care, eMedicine, Insulin, Journal of Family Practice, The Lancet and webMD.

He has lectured at national meetings since 1986 on sports medicine, exercise testing, diabetes and cardiovascular disease. In 2002 he was named to the list of the five “Top Florida Doctors” in Sports Medicine and was named to “Kansas City Super Doctors” in 2007, 2008, 2009. In 2010, 2011 and 2012 he was named to the “Kansas City Super Doctors” in Sports Medicine. He was listed in the Premier Who’s Who Registry of Outstanding Professionals in 2009—2010; listed in the Guide to America’s Top Family Doctors 2010 Edition; Who’s Who in Medicine and Healthcare in 2011 and Named to Who’s Who in America 2012 66th edition.

He enjoys woodworking and jazz music. He and his wife, Dara, have been married 42 years and are Lifetime MS 150 Riders.

Registration Not yet available Register Now
Accommodation
Accommodation:
PRICING: Although subject to change at any time, prices quoted above are generally available until 90 days prior to sailing but convert to the typically higher market rate after that date.
FUEL SUPPLEMENT: Cruiselines may implement a fuel surcharge depending on the price of crude oil.
CANCELLATION PENALTIES: Cancellation policies vary by cruise line, itinerary and length of cruise. When reserving your stateroom, please review the policy applicable to this cruise with our staff.