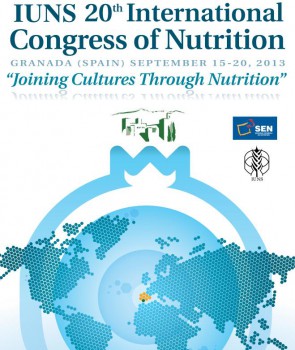 On behalf of the SEN and the International IUNS I would like to invite you to come to Granada on 15-20th September 2013 and enjoy the scientific and cultural activities we are currently designing and developing for the 20th International Congress of Nutrition. Granada, through its history has been open to different cultures, people and beliefs.
Historically, Granada is also the last redoubt of Islam in Western Europe, the Alhambra and the Generalife being clear samples of the splendour of the Mozarabic civilisation.

The 20th ICN will be held in the Granada Conference and Exhibition Centre, one of the most modern and best equipped in Europe. It is built on six stories and has two main auditoriums, named Gracia Lorca and Manuel de Falla, with a capacity up to 2.000 and 500 seats each, and up to nine rooms of for scientific sessions with adjustable capacity from 200 to 600 seats, and 22 break-out, workshop and seminar rooms. A large exhibition hall is available for commercial exhibitions and scientific poster sessions. There are also excellent restaurant facilities and two coffee bars.

The Airports of Granada (14 minutes from the city centre), and Malaga (the third busiest airport in Spain, 1 hour from Granada serve with several daily low cost and regular flights from and to Madrid, Barcelona as well as all major national and international destinations.

Concerning the scientific activities we have considered a 5 days congress from the 15th to the 20th of September, 2013, which will include seven plenary lectures, debate sessions, parallel Symposia dedicated to major Food and Nutrition topics, with an estimated number of 64 Symposia, two Focus Symposium on Nutritional problem of Iberoamerica and Mediterranean regions and two sessions of poster discussions. In addition, two days Pre-Congress Satellite Symposia will be organised.

An increasing number of the European citizens are immigrants from Africa, Latin-America or Eastern European origin. Many of them try to continue with their own feeding and lifestyle habits, but at the same time they need to be incorporated to the culture of the host countries. Thus, we have selected the slogan for the ICN 2013 as “Joining Cultures through Nutrition”.

Therefore, our main goal it is from now on to offer to all of you a great, modern and attractive Congress joining different cultures, traditions and knowledge throughout the new aspects of the Nutrition development all around the world.

I appreciate very much your attention and I hope to have the opportunity to welcome you in Granada.
Thanks a lot to all of you and enjoy the video we have prepared specially for this occasion about Granada, Andalucia and Spain!!!

Granada has a wide and varied hotel offer that will cover the accommodation needs of all the participants. By clicking on the name of the hotels, you will download a zip file with some useful information about each one.