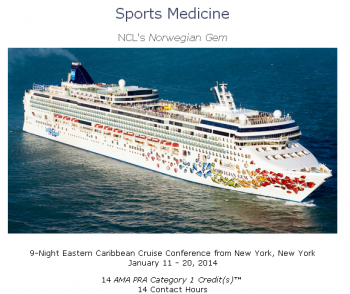 Continuing Education, Inc. is accredited as a provider of continuing nursing education by the American Nurses Credentialing Center's Commission on Accreditation.

Accredited status does not imply endorsement by Continuing Education, Inc/University at Sea or ANCC of any commercial products displayed or used with an activity.

Dr. Rodriguez is the Director of the Sports Medicine Fellowship and Assistant Director to the Family Residency Program at Bayfront Medical Center. Dr. Rodriguez received his B.A. in Biology from Harvard University in 1989. He completed his medical degree at the Rosalind Franklin University of Health Sciences/The Chicago Medical School in North Chicago, IL in 1993. Following medical school Dr. Rodriguez completed a General Surgery Internship at Eastern Virginia Medical School in Norfolk, VA. He then joined the United States Navy where he served as General Medical Officer from 1994 to 1997. After completing his active duty commitment he remained in the United States Naval Reserve until 2002 when he was Honorably Discharged.

Dr. Rodriguez has served as a team physician and provided medical coverage for many of our local sports. These activities include the Tampa Bay Rays, Eckerd College and University of South Florida sports, St. Anthony’s Triathlon, Seminole High School, Indian Rocks Christian School and the Tampa Bay Storm. He is also a licensed professional ringside physician and provides medical coverage for professional boxing and mixed martial arts in Florida.

PRICING: Although subject to change at any time, prices quoted above are generally available until 90 days prior to sailing but convert to the typically higher market rate after that date.
FUEL SUPPLEMENT: Cruiselines may implement a fuel surcharge depending on the price of crude oil.
Further Details:
Cancellation policies vary by cruise line, itinerary and length of cruise. When reserving your stateroom, please review the policy applicable to this cruise with our staff.
Scientific Content Up to Date