The 4th World Congress on Controversies in Pediatrics (CoPedia 2017) 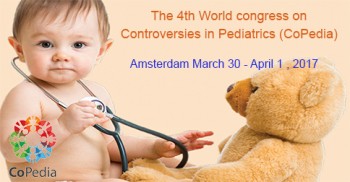 Book your meeting or event at Mövenpick Hotel Amsterdam City Centre, where our conference & meeting centre can accommodate events for up to 450 delegates in our 12 flexible meeting and breakout rooms (1,100 sqm). We are now pleased to offer an additional 10  meetings rooms within the meeting centre 2, giving you the option to arrange meetings or training sessions without booking hotel rooms. If you are looking to book a larger conference, we are part of ijVENUES which offers an impressive auditorium and exhibition space for up to 1900 delegates. All meeting rooms within our meeting centre are equipped with the latest technical equipment, such as free WiFi Internet and modern AV equipment. Facilities can be controlled by a small touchscreen remote control, making it perfect for business meetings. For a feel-good finishing touch, all tables are set with fair-trade linen.
Visit the Venue to read more
Currency:
EUR
Accreditation:

The 4th World Congress on Controversies in Pediatrics (CoPedia) will take place March 30 – April 1, 2017 in Amsterdam, The Netherlands has been submitted for accreditation by the European Accreditation Council for Continuing Medical Education (EACCME).

The EACCME is an institution of the European Union of Medical Specialists (UEMS): www.uems.net

The CME accreditation is valid for the main congress program only and does not cover the company-sponsored symposia.

For the Italian participants

The program for 4th World Congress on Controversies in Pediatrics (CoPedia) will take place March 30 – April 1, 2017 in Amsterdam, The Netherlands, will be submitted for CME accreditation from the Italian Ministry of Health.

This Quality certification requires all participants to fill in a scientific questionnaire and to evaluate the overall quality of the event. Questionnaires will available online at the Congress website as at the conclusion of the congress for 3 weeks.

The American Medical Association (AMA) has an agreement of mutual recognition of continuing medical education (CME) credit with the European Union of Medical Specialties (UEMS). Under the terms of this agreement, the AMA will convert CME credit certified by the European Accreditation Council for Continuing Medical Education (EACCME), the accrediting arm of the UEMS, to AMA PRA Category 1 Credit™.

Physicians (MDs, DOs or equivalent international degree) may have their EACCME credit converted to AMA PRA Category 1 Credit™ by applying to the AMA.

Disclosure of Conflicts of Interest (COI)

All declarations of potential or actual conflicts of interest, whether due to a financial or other relationship, must be provided to the EACCME® upon submission of the application.

Declarations must include whether any fee, honorarium or arrangement for re-imbursement of expenses in relation to the event has been provided.

We confirm that all funding provided is free of any attempt to influence the program, individual sessions, subjects for discussion, content or choice of faculty members conflicts of interest. Support of the Congress is kept in strict accordance with CME accreditation criteria.

Industry support may be viewed here.

The registration desk will be open during the following hours:

All participants and exhibitors are kindly requested to wear their name badges throughout the Congress in order to be admitted to the lecture halls and scheduled activities.

Certificates of attendance (non CME) will be available for all participants and may be collected at the Registration Desk on Saturday, April 1, 2017.

The exhibition will be open during the sessions’ hours. Lunch and coffee breaks will be held at the exhibition area.

Business casual for all occasions

This is a non-smoking event

Netherlands is a member of the EU, and applies the EU legislation in full. The entry formalities for Netherlands vary according to the country of origin. All visitors entering the Netherlands must possess a valid passport or a valid picture ID in some cases.

Entry visas can be obtained at any Dutch embassy, consulate, and in some cases at border crossing points.

Amsterdam is a historic city with a futuristic outlook that meshes business growth with sustainable initiatives.

The city has been recognised as among the top 10 most important commercial centres in the world, and has been ranked the fourth most influential business centre in Europe (source: MasterCard Worldwide Centers of Commerce Index). And as an urban area dedicated to environmental innovation, Amsterdam also earned a spot as one of the eight finalists for the first-ever European Green Capital Awards.

Amsterdam is very well connected, ensuring it is a comfortable choice for international visitors. Amsterdam Airport Schiphol is one of Europe’s four major hubs, operating to more than 300 direct destinations. What’s more, the airport has exceptional public transport connections with the city (20 minutes or less to the city centre), as well as a taxi fleet that is 100% electric.

Within Amsterdam, transport is also straight-forward and convenient. The extensive public transport network connects the city and its districts by train, tram, metro, bus and ferry. And don’t forget to experience Amsterdam like the locals do: by bike!

Amsterdam is famous for its canals, which can make getting around a little confusing as everything sort of looks the same but it gives the city a unique and beautiful atmosphere, and means you’re never short of somewhere relaxing to sit and enjoy a rest and a beer. You can rent a pedalo, or you can take a cruise around the canals for about 15 euro.

4. You’ll Get One of Europe’s Best Visual History Lessons

With more than 6,800 houses and buildings protected as monuments and dating from the 16th to the 20th century, Amsterdam boasts the largest historical inner city in Europe. The towering, sturdy warehouses and elegant homes built by wealthy merchants during Holland’s Golden Age (the 17th century) line the city’s canals and are perhaps its most distinguishing architectural features.

Take your pick: See the works of Dutch masters and treasures of a time when Amsterdam was the richest city in the world at the Rijksmuseum; learn about the styles and secrets of the man who could be considered Holland’s most interesting painter at the Van Gogh Museum; or walk through the tiny annex that a group of eight called home for two years during Nazi-occupied Amsterdam in World War II at the Anne Frank House. These are among the top museums in Amsterdam, but there are nearly 50 more to teach, entertain or move you.

The 4th World Congress on Controversies in Pediatrics (CoPedia) will take place March 30 – April 1, 2017 in Amsterdam, The Netherlands.

CoPedia is one of the few congresses that brings together groups of interdisciplinary experts to tackle current clinical controversies in the field of pediatrics. The 4th CoPedia will focus on Infectious Diseases, Immunizations, Nutrition, Endocrinology, Obesity, Allergy, Asthma, Neurology, ADHD, Cardiology, Hematology, Neonatology, and more.

The CoPedia scientific program will address the most burning questions in the field of pediatrics and will provide an effective forum to discuss and debate these questions. In addition, there will ample time allocated to speaker-audience discussions.

As one CoPedia participant put it, “you’ll probably have to travel to half a dozen congresses to get what you get at CoPedia.”

We look forward to an exciting scientific event in the beautiful city of Amsterdam.

Marc A. Benninga, The Netherlands

Below is the registration table

Registration Documents:
Letter of invitation:
We can provide upon request Letter of Invitation

Accommodation Not yet available
Scientific Content Up to Date

Abstracts should be submitted in English and contain no more than 3,600 characters, including titles, graphs and non-visible characters, such as spaces and line breaks.Please write concisely and clearly and follow this structure:Problem statement: Why do we care about the problem?Methods: What did you actually do to get your results?Results: What did you learn/invent/create?Conclusion: What are the implications of your findings?Please ensure that your abstract does not contain spelling, grammar or scientific mistakes, as it will be reproduced exactly as submitted. No proof reading will be done. Linguistic accuracy is the responsibility of the submitter.Images/graphs/tables can be uploaded according to the following criteria:You may improve the quality of your image for publication by increasing the number of dpi as well as the height and width of the image (in pixels).If you wish to modify your image, you may use the programme Paint.Net (free software).Abstract submissions that do not meet the above noted guidelines may be rejected without review.The Scientific Committee may request additional information about abstracts and reject abstracts.

Supporting the 4th CoPedia – What’s in it for the Industry?