The Immunology of Ageing 2014 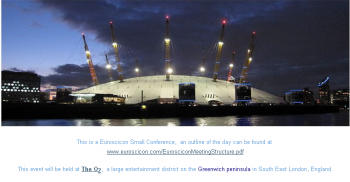 The immune system is profoundly affected by ageing. A deterioration in the ability to develop immunity after vaccination and to respond to infections is brought on by natural age advancement.

The Immunology of Ageing 2014 brings together:

Deborah Dunn-Walters is Reader in Immunology at King's College London, with extensive experience in B cell repertoire analysis, and molecular events involving the immunoglobulin gene during B cell development. She combines traditional molecular biology techniques with novel mathematical analyses to devise new ways of investigating the humoral immune system.  She is particularly interested in research that aims to improve the health of older people.

Jacek M. Witkowski is a professor of cell biology, immunology and biogerontology, and over last decade heads the Department of Pathophysiology, Medical University of Gdansk, Poland.  His group was the first to report the aging-related modulation of many human T cell features, including decreased membrane potential and Na-K ATPase activity, accumulation of regulatory T cells expressing low numbers of CD4, and reduced expression and glucuronidase activity of Klotho. Currently they investigate the determinants of modified human immune cells’ behaviour during physiological aging, longevity, and age-related pathologies. Recently his group had reported reduced amounts of calcium-activated proteases (calpains) in elderly lymphocytes.

Heping Xu graduated in medicine from Hengyang Medical College, China in 1987. He completed his ophthalmology training in XiangYa Hospital and obtained his PhD in vision science from Hunan Medical University in 1994. He carried out his post-doc training, first in cell biology in Japan (1997-2000), and then in ocular immunology at the University of Aberdeen (2000-2004). Dr Xu was awarded a Research Council UK (RCUK) fellowship in 2005, and was promoted to Senior RCUK fellow in 2008. Dr Xu moved to the Centre for Vision and Vascular Science, Queen’s University Belfast in 2009 as a Senior Lecturer, and was promoted to Reader in 2011. Dr Xu’s research is centred on the immunopathogenesis of sight-threatening retinal diseases, including uveoretinitis, age-related macular degeneration and diabetic retinopathy.

Ioakim Spyridopoulos has received his Medical degree in 1992 at the University of Hannover, Germany. He has been a postdoctoral fellow at TUFTS University in Boston/MA from 1995-1997. Further research stays at Tübingen University and Frankfurt University have added to his work on atherosclerosis research. Following his appointment as Hon. Consultant in Interventional Cardiology at the Freeman Hospital at Newcastle Upon Tyne Trust in 2008 he was also appointed Chair of Cardiovascular Gerontology with Newcastle University. His main research field is "Inflammaging"  in cardiovascular system, especially in the context of coronary heart disease.  He is supported by the British Heart Foundation  and the NIHR Biomedical Research Centre.

James Turner undertook a PhD between 2007-2010 at the University of Birmingham. His thesis covered topics including immunosenescence, oxidative stress and exercise. James remained in Birmingham to undertake two post-doctoral research positions; first between 2011-2012, characterising T cell responses to novel leukaemia antigens, and second, from 2012-present, conducting research towards producing a prophylactic Epstein-Barr Virus vaccine. From September 2013, James became employed as a Lecturer in the Department for Health at The University of Bath, where he will lead a programme of research that spans the domains of physical activity, immune competence, and ageing.

I Maeve Rea, Senior Lecturer/Consultant Physician in Geriatric Medicine at Queens University Belfast, was educated at Queens University and did postgraduate research in immune-genetics at Stanford University with Prof Rose Payne. She teaches widely in the Undergraduate Medical curriculum and within her Health Service remit, she provides a clinical service to Elderly people, with a special interest in patients over 90 years of age.  Dr I Maeve Rea has a long-time research interest is in healthy ageing and set up and co-ordinates a longitudinal study of octo/nonagenarians, Belfast Elderly Longitudinal Free-living Ageing STudy (BELFAST) and is a Prinicpal Investigator in the Genetics of Healthy Ageing Study (GeHA), which is contributing to understanding the genetic, immunological, cardiovascular and nutritional factors contributing to good quality ageing.